If you remember in Terminator 2, the actor playing John Connor wore a Public Enemy t-shirt. Well, Uncle John actually does like Public Enemy. The movies got one thing right! 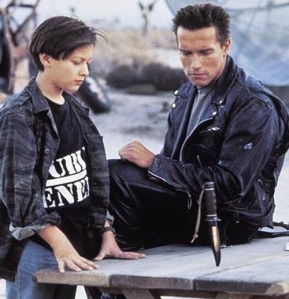 When they were in hiding, Uncle John played their albums all the time, and Grandpa started liking them too. Since Grandpa’s African American, he related to their messages about racism. Plus as a terminator, he experienced even more prejudice. And there’s a guy in the band named Terminator X! Another Black terminator!

Grandpa heard they were coming to town, and he rushed to get tickets. He even got backstage passes somehow!  Apparently, the concert was amazing. They couldn’t believe Chuck D and Flavor Flav still had so much energy.  They jumped around the stage all night.

They went backstage after the concert to meet the guys. Chuck D was really gracious and talked to them for a few minutes. Then they met Terminator X.  Grandpa shook his hand and knew right away. Terminator X was not a real terminator!!

Uncle John and Grandpa went into shock. Uncle even yelled at Terminator X–“Why did you take that name if you weren’t really a terminator?” Luckily, once the band learned he was the real John Connor, they cut him some slack. They actually apologized to Uncle and Grandpa.

Two days later, they still moped around the house.   Grandpa even threw out his Public Enemy CD’s and shirts!  Rick went to the trash can and pulled the stuff out.  He knew Grandpa was just mad and would regret getting rid of his collection.

I can’t imagine learning your idol was not who you thought he was. The ideal image shattered.  If I met Calvin Klein and found out someone else designed for him, I would lose it.   Or if Angelina Jolie wasn’t an alien-human?? I don’t even want to think about that.